Pulling the Dolly Off the Coating

Typically, the stress should be increased by no more than 1MPa/s; however, the time over which the force should be applied varies from 90 to 240 seconds maximum, depending on the Standard. Whilst theoretically this is what is required, it is not so easy to achieve it in practice using manual devices. For example, when using the Elcometer 106, the force is applied by the turning of a hand wheel. Similar to when a jar is being opened, the initial force applied is the greatest and the force reduces as we complete the first twist. 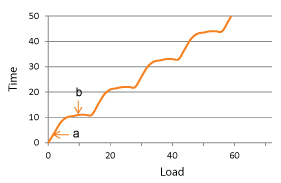 In graph below, the region marked “a” is where the initial higher load is applied as the wrist reaches its turning limit. The load reduces significantly in zone “b”, the load therefore, cannot be said to have been applied particularly evenly. 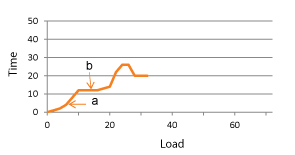 When using a ratchet arrangement to apply the load, the force increases as the ratchet turns (zone “a”). Zone “b” indicates the area where the ratchet is “reset” to its original position, resulting in no applied load. Ideally the load should be applied at a constant rate; gauges such as the Elcometer 506, the Elcomerer 508 and the Elcometer 510 enable the user to do this. 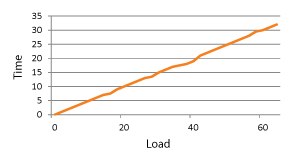