Preparing the Surface for Coating

It would be wrong to assume that the blasting process will remove all these contaminants, what may happen is that whilst they appear to have gone, they will have been distributed over the steel surface as a thin layer.

The most common method of cleaning depends on the size of the structure but can include a fresh water wash before abrasive blasting of large areas or the use of a water blast or solvent wash, followed by drying with clean rags. 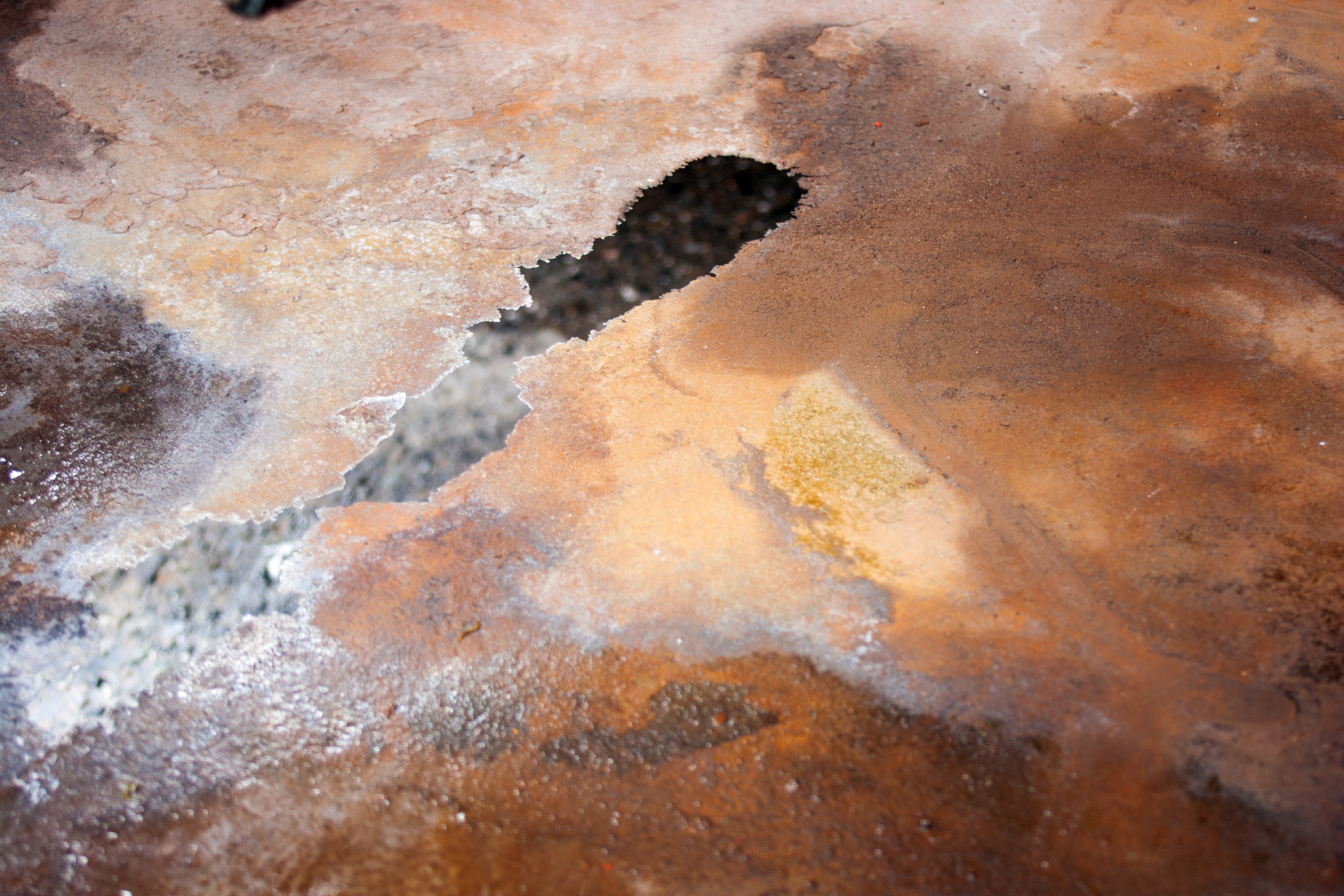 Fig 1. Contaminants such as oil and grease should be removed before blasting 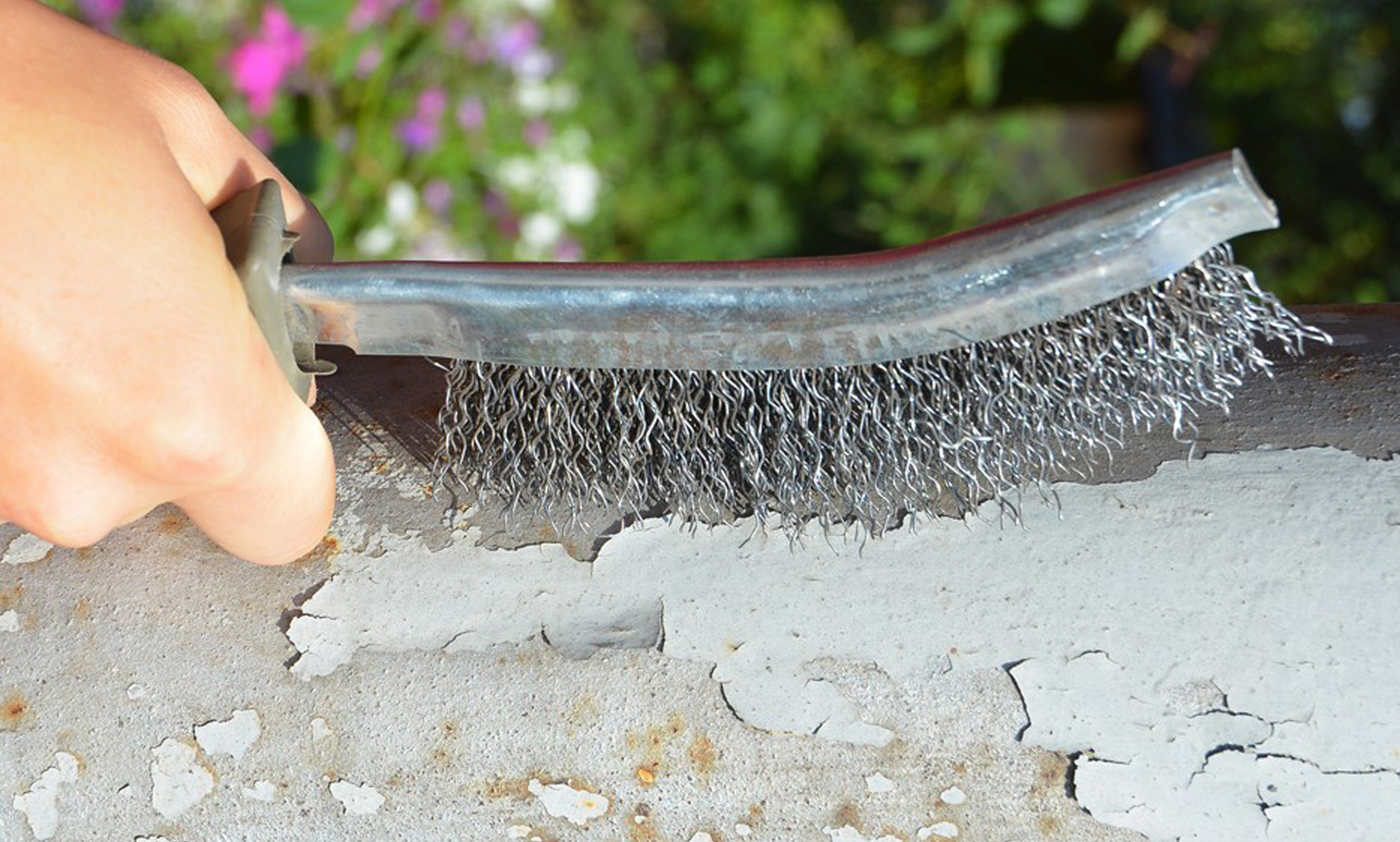 When the area to be coated is either too thin or small, where access is difficult for blasting or the area would serve as a blast media trap, then mechanical or manual methods may be used. Cleaning the surface with a wire brush or scraper can remove small amounts of coating or corrosion but is not very effective in removing mill scale or rust.

Power tools are more effective and faster than hand tools. In both cases, however, the profile created in the substrate is minimal.

One of the more common failures of protective coatings is due to inadequate surface preparation of the fasteners, nuts, bolts and screws etc. It can also be caused by the mixing of materials which may lead to bi-metallic corrosion. Structures are carefully designed to avoid dissimilar metals causing this.

The same care and attention in surface preparation should be taken with the fasteners as is taken with the flat/open areas of the substrate. It is often also necessary to use hand tools in these areas. 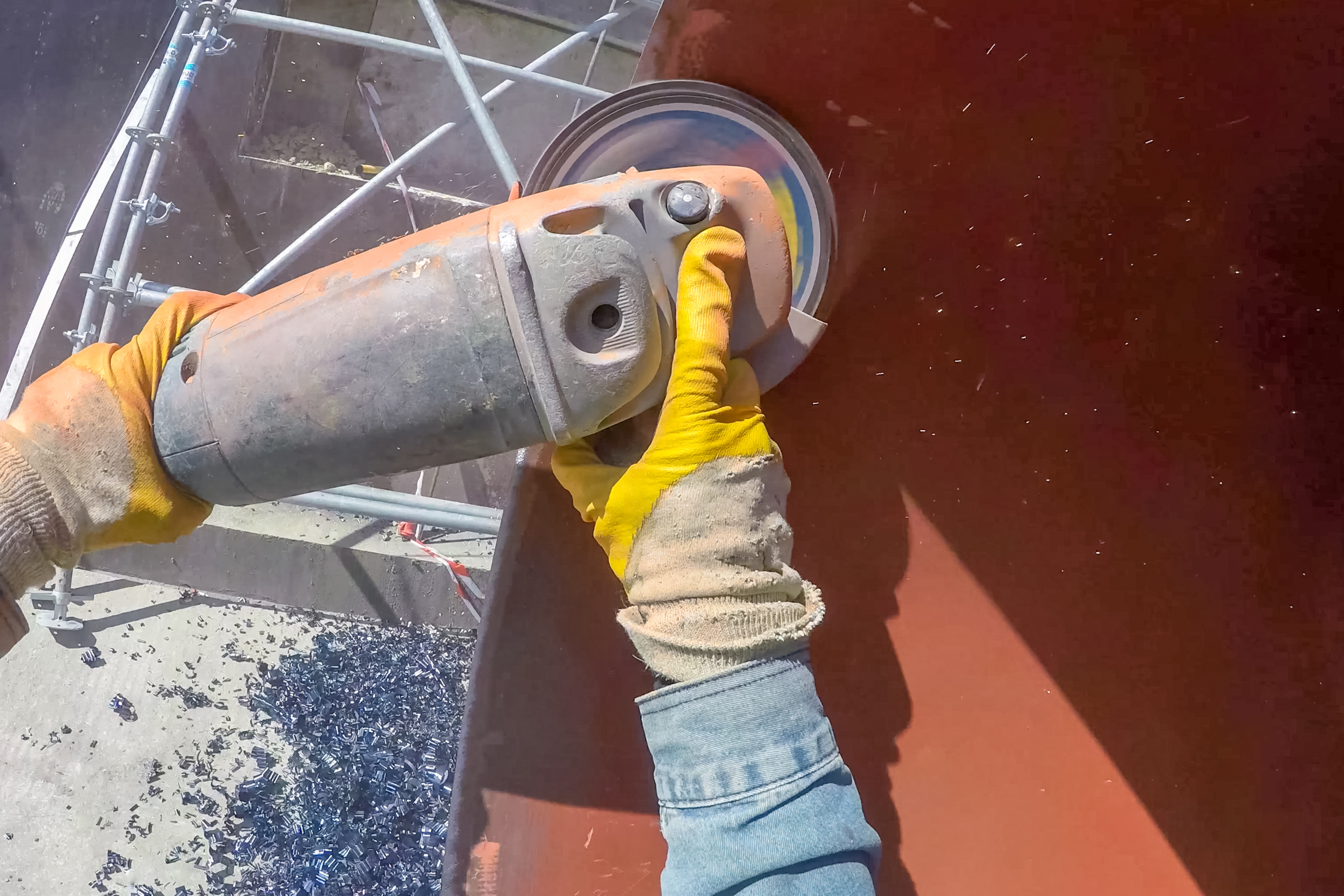 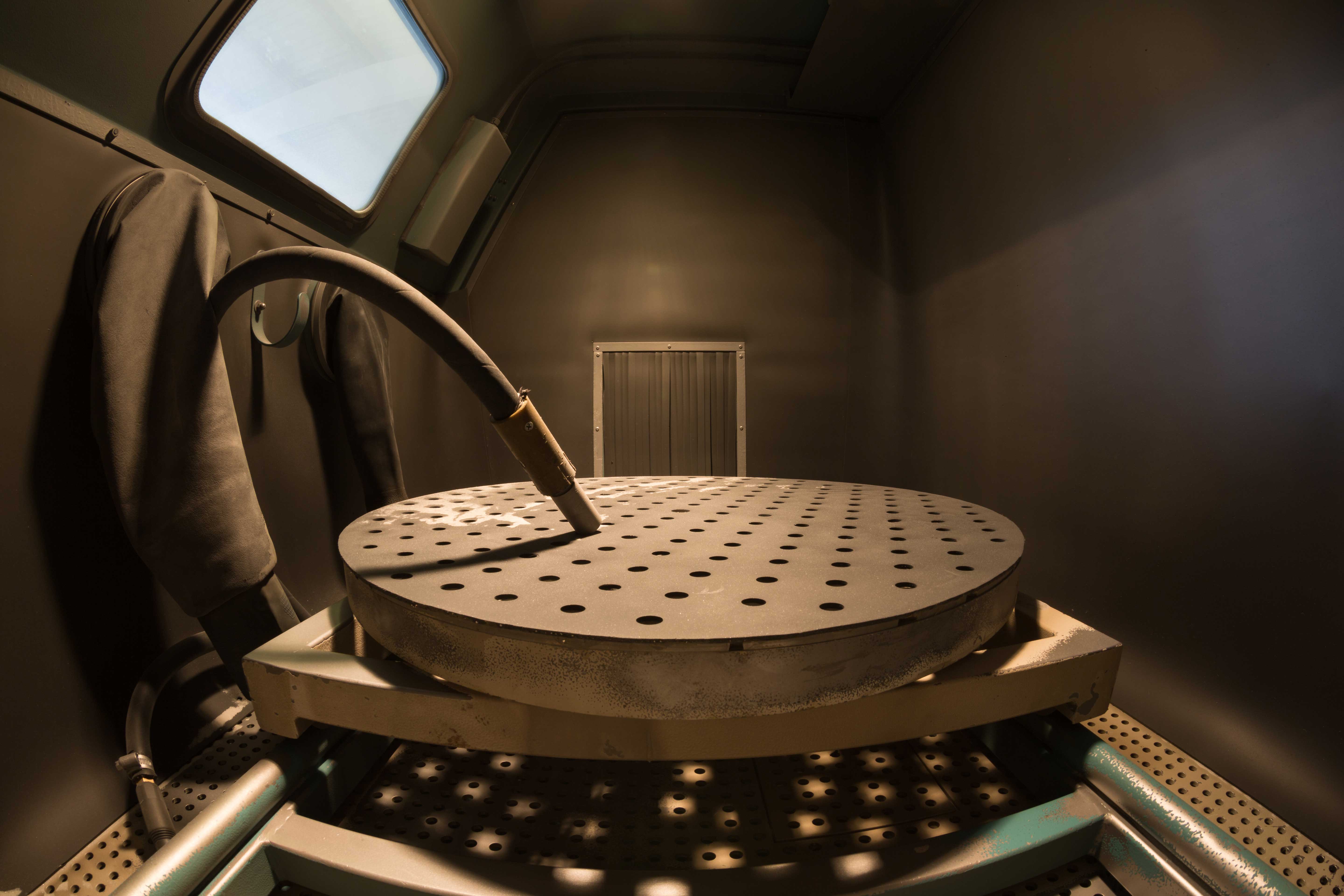 Fig 4. Blasting booths can also be used for large assemblies

Blasting of large structures, such as ship assembly blocks and pre-fabricated structural steel, is undertaken outdoors or without containment in large blast halls. These structures can be enclosed to “encapsulate” the work area so that the rust and paint removed, and the blast media is contained, preventing contamination of other areas and can be recycled or be single use.

A variety of abrasive blasting media is available to accomplish a wide spectrum of tasks. The shape, size, and material of the abrasive used is dependent upon the shape and hardness of the structure, its base material and the task to be performed. Abrasive grains are typically sized or graded using a series of mesh sieves with specific percentage ranges for each screen depending on the grit size.

Shot is small round balls, typically made of steel, that produce a duller finish than grit which is small angular particles of steel. The brightness of the surface is not an indication of a variation in cleanliness but merely a result of the difference in the shape of the profile achieved by a rounded abrasive versus an angular abrasive and the abrasive material used; hence its reflectivity.

The peak height and peak count of the profile achieved will be similar for similar sizes of abrasive particles, irrespective of their shape but the angularity of the profile may vary.

Many tasks can be accomplished by abrasive blasting, such as stripping of paint and other coatings, cleaning and de-scaling, de-rusting, de-burring, etching or creation of profile.

Reusable media is generally used for “closed circuit” blasting such as blast cabinets or blast chambers. Here the media is collected, optionally graded and re-used. Eventually, the media is worn to a size that is not usable in the process and is replaced. 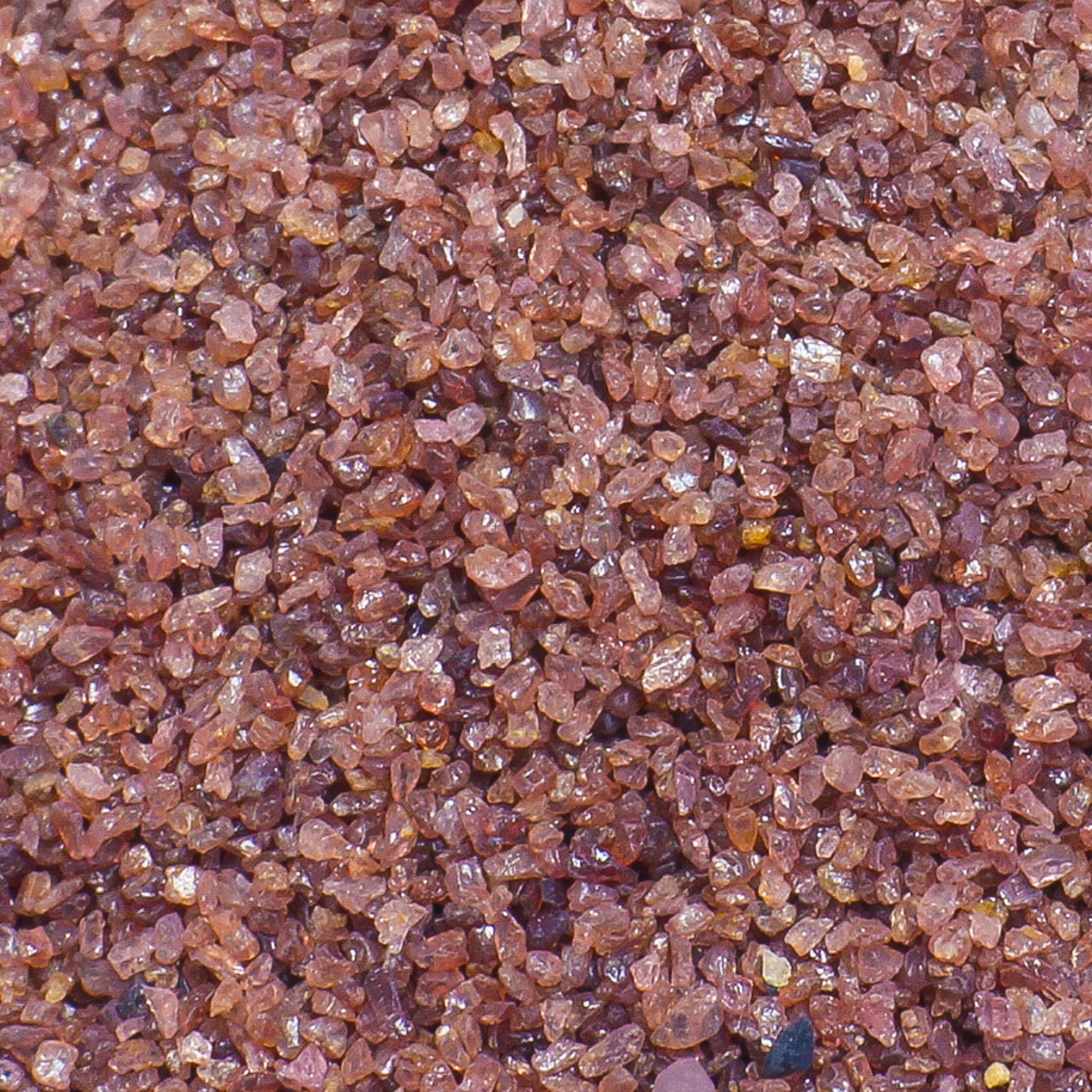 Garnet: which has replaced silica sand, is a natural silicate mineral, consisting of a combination of Almandite and Pyrope, which is mined from igneous mineral deposits or in concentrated pockets of alluvial deposits of old riverbeds. Although typically more expensive than sand, it creates much less dust and therefore presents less of a safety hazard.

Agricultural: Typically crushed nut shells or fruit kernels, these soft abrasives are used to avoid damaging the underlying material, such as when cleaning brick or stone, removing graffiti or the removal of coatings from printed circuit boards before being repaired.

Synthetic: This category includes corn/wheat starch, sodium bicarbonate and dry ice. These “soft” abrasives are used in similar situations to the agricultural media, where it is important not to damage the substrate. 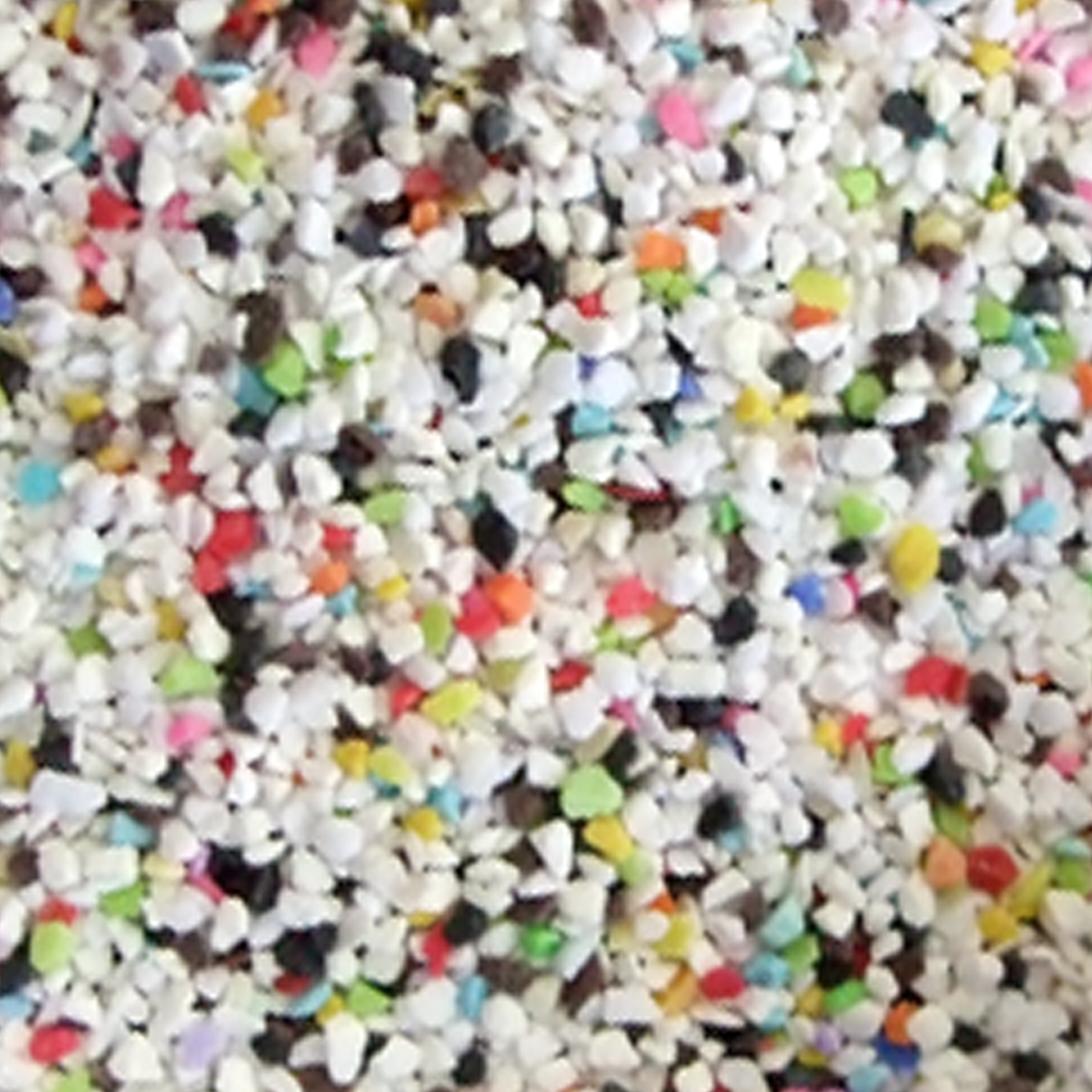 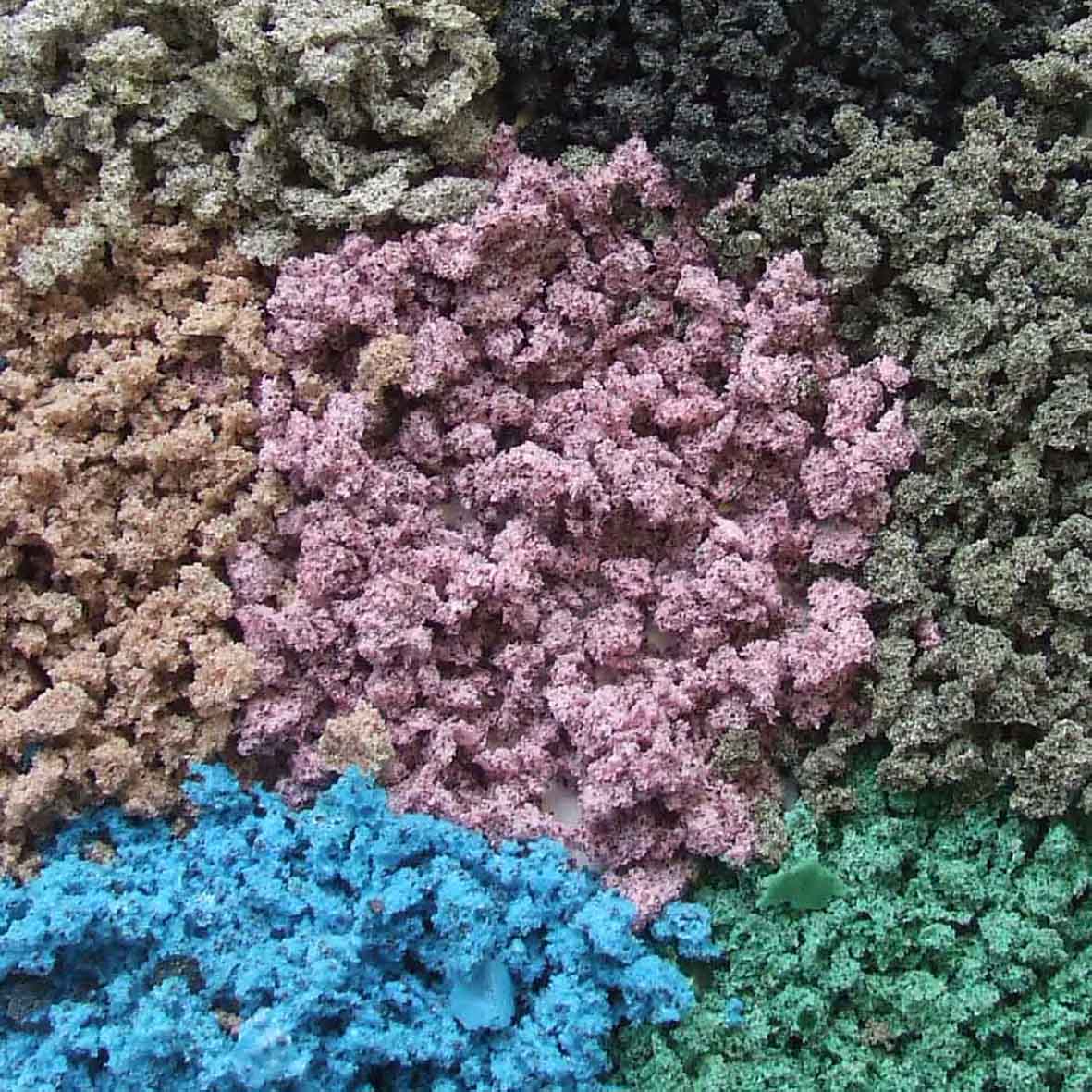 Sponge: Shot impregnated sponge particles are used when there is a requirement for minimising dust levels. This relatively clean blasting method is ideal for enclosed areas such as ballast tanks, as the sponge “collects” much of the debris created by the shot impacting on the surface.

Mineral: Silica sand was the most commonly used type of mineral abrasive, however, it has been linked to the disease silicosis and has subsequently been banned in many parts of the world.

Particle shapes fall broadly into the categories of shot and grit. Shot abrasives are spherical particles that distribute their impact over a larger area, moderating the impact and creating a round-bottomed dimple in the surface of the substrate. Sometimes called a peened finish, the effect of shot blast treatment is likely to be a semi-reflective sheen appearance.

Grit abrasives are angular particles. The impact may be concentrated on a point of the particle or a sharp edge, generating an etched, matt finish that is bright, but non-reflective. 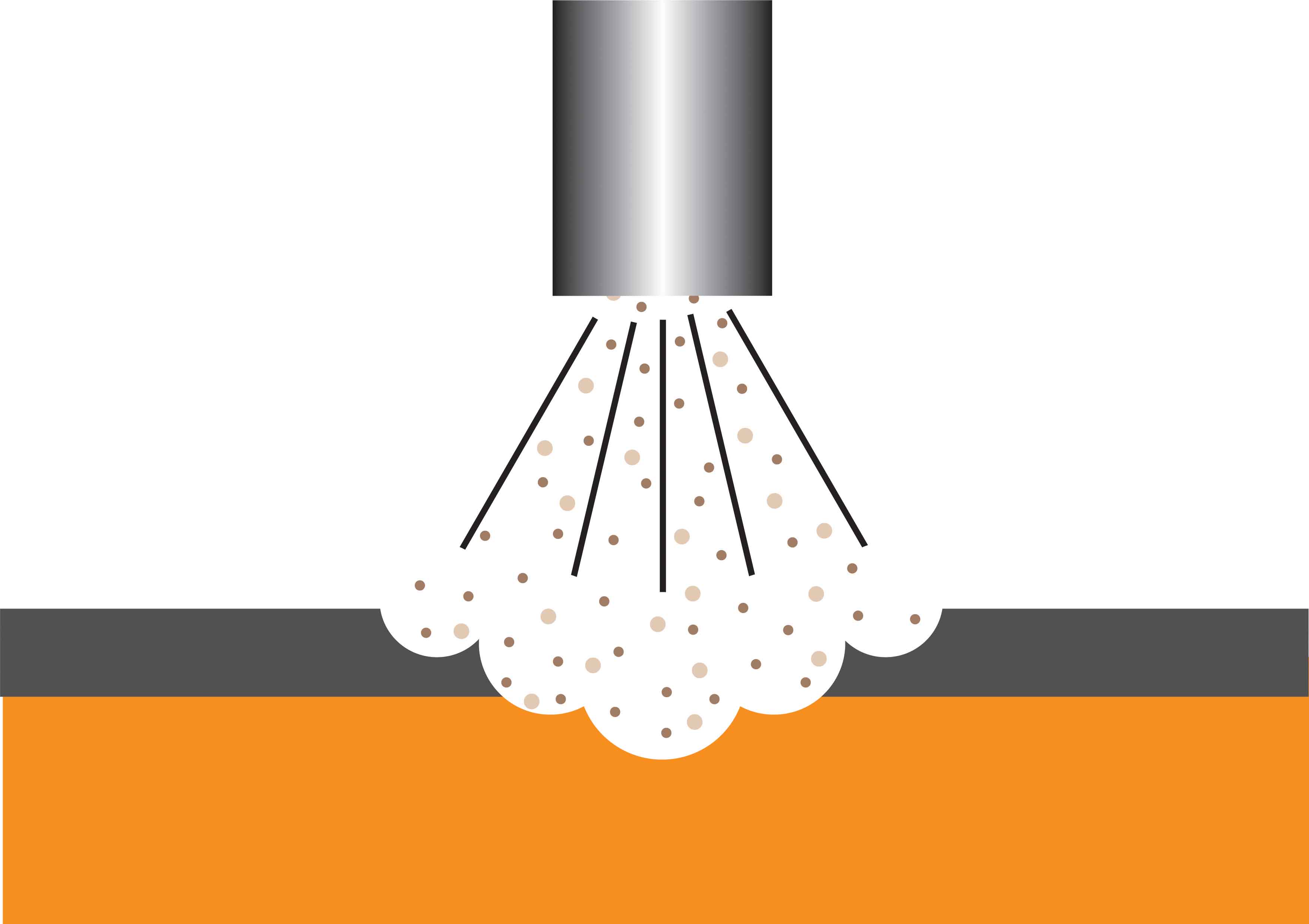 Particle size has an important effect on the number of impacts per second of blasting, so it is advisable to use media of the smallest screen size that will do the work. There will be a higher number of smaller particles in a given volume than larger particles, hence more impacts on the surface, reducing process time to a minimum. Larger particles may be capable of creating bigger indentations and more texture in the surface whereas smaller ones produce dimples or angular dents of a lesser diameter.

In some instances, the choice of media screen size is dictated by surface features such as holes or narrow places where shot or grit may penetrate less effectively, become entrapped or lodge in recesses of the component.

To summarise, the media used during the blasting process produces different visual surface finishes; large particles create bigger indentations in the surface, smaller ones produce dimples or angular dents of lesser diameter. Paint manufacturers’ guidelines should be referred to for each particular job. 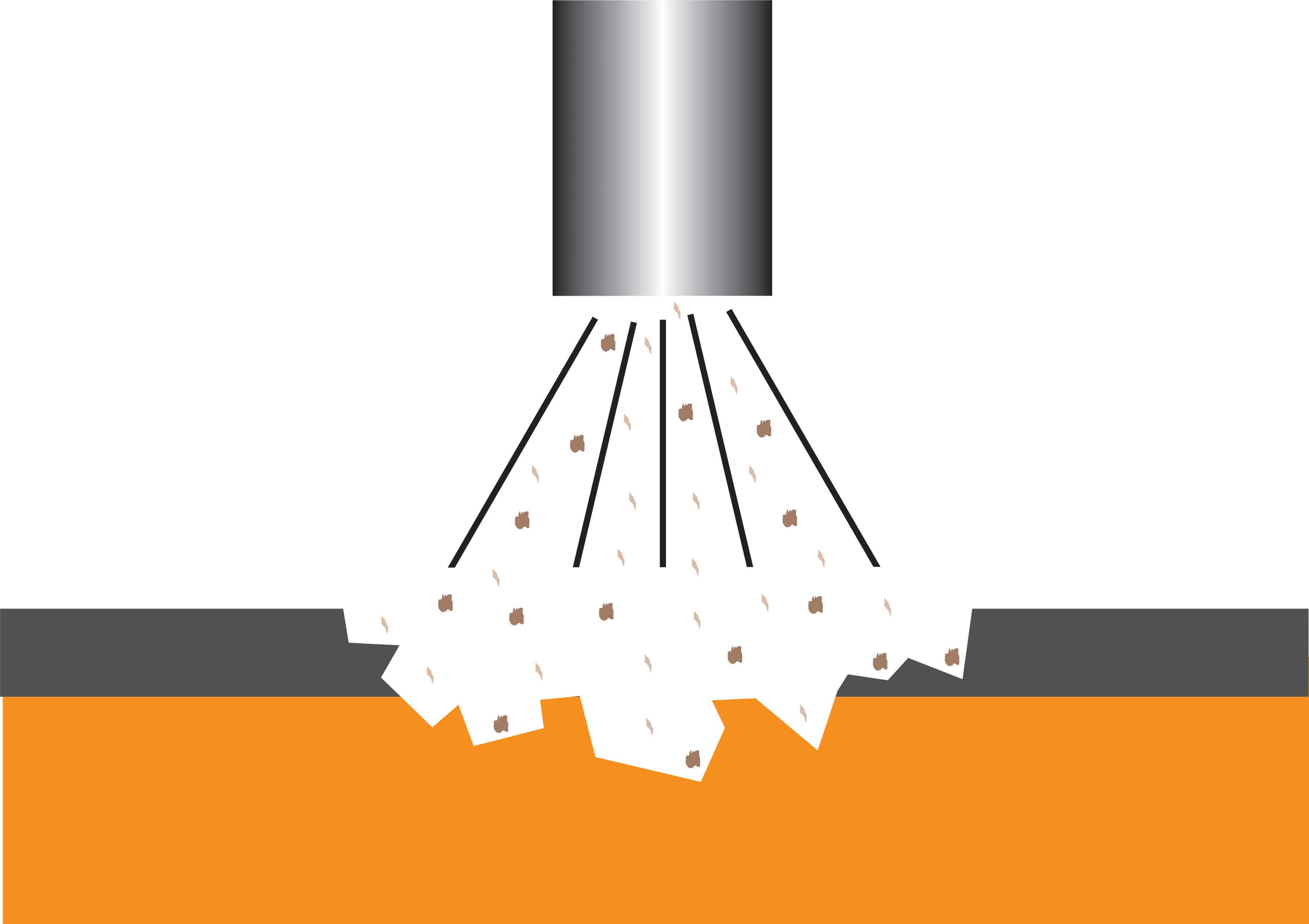 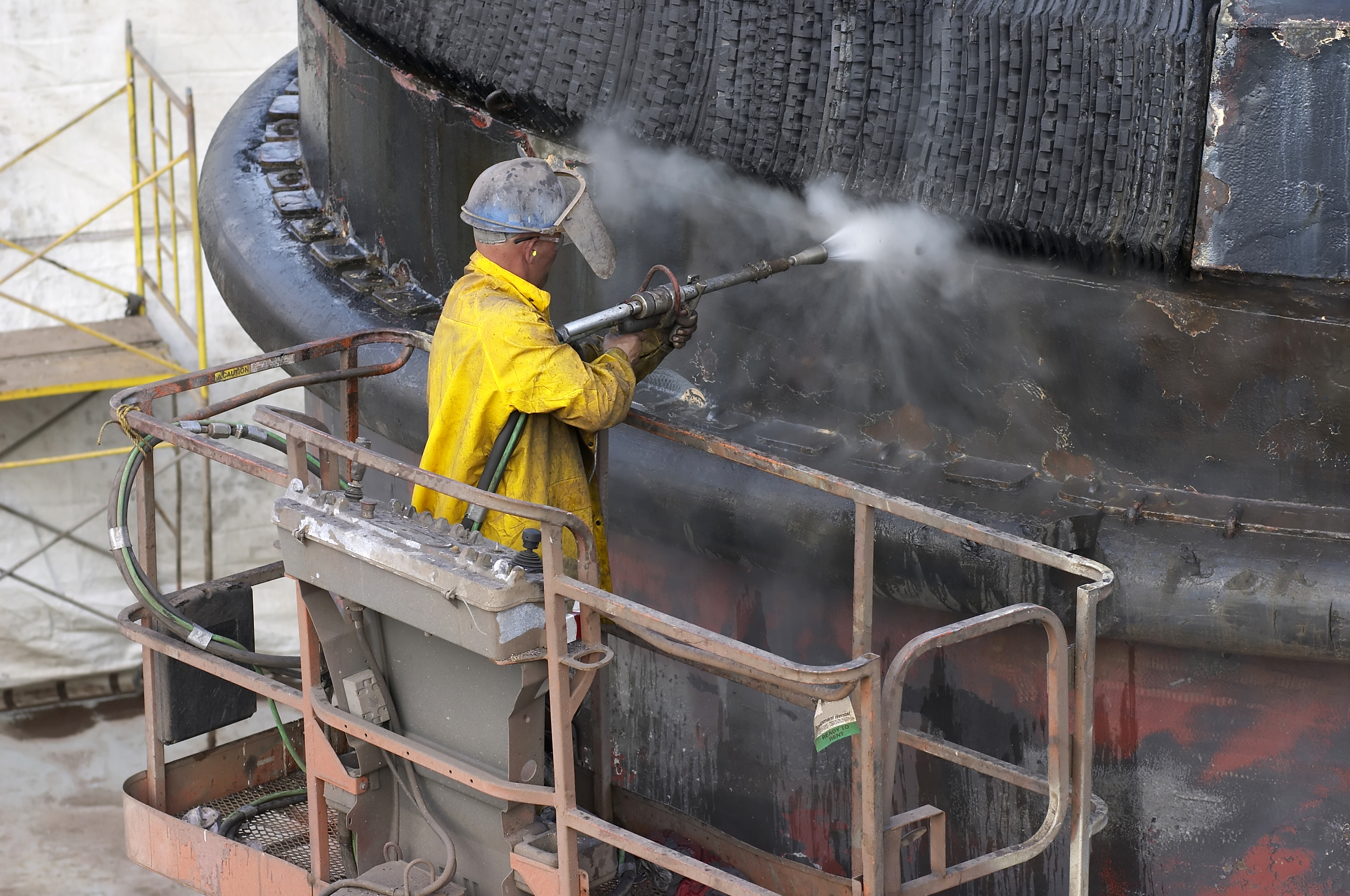 High pressure water jetting is typically used for surface cleaning. At ultra-high pressure (UHP) however, water jetting can be very effective at removing coatings and corrosion. High pressure or UHP water jetting may slightly influence the profile (as would re-blasting, with abrasive, a previously abrasive blasted surface. This WILL NOT create an anchor pattern).

Preparing the Surface During Maintenance

Despite the care and attention given to the surface preparation and coating of a new structure, in time the structure will inevitably require maintenance to sustain the protective and/or cosmetic qualities of the applied coating. Once it has been decided that maintenance is required, a survey of the structure should be carried out to decide whether full or partial re-coating is required.

Those areas of localised coating failure can be stripped back (also known as feathering) to the uncoated substrate and prepared for recoating in line with the job specification. Localised blast cleaning, or manual and mechanical methods - where blasting is not practical, are used to achieve this standard. This is called sweep blasting, where a very light blast is applied by “sweeping” the nozzle over the relevant area.

Over time, even protective metal coatings such as galvanising will also require maintenance - usually by the application of a paint coating. When zinc galvanised coatings fail, they leave behind a mixture of a zinc/iron alloy layer and a layer of rust on the substrate.

Zinc corrosion can be removed using manual cleaning methods, but, if there is heavy rusting, then abrasive blast cleaning is typically used to prepare the surface before painting. 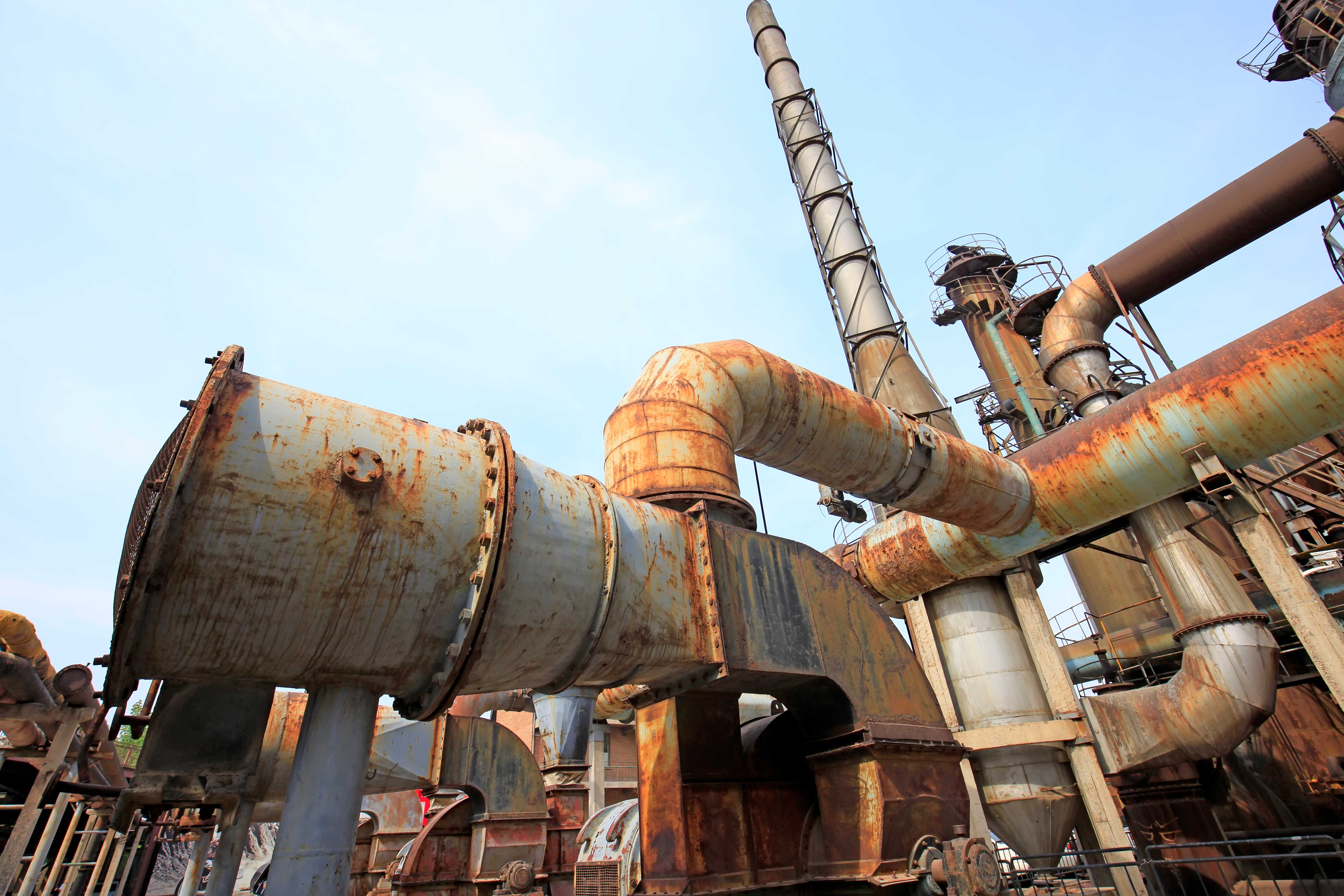 Fig 7. At some point, the structure will need re-painting