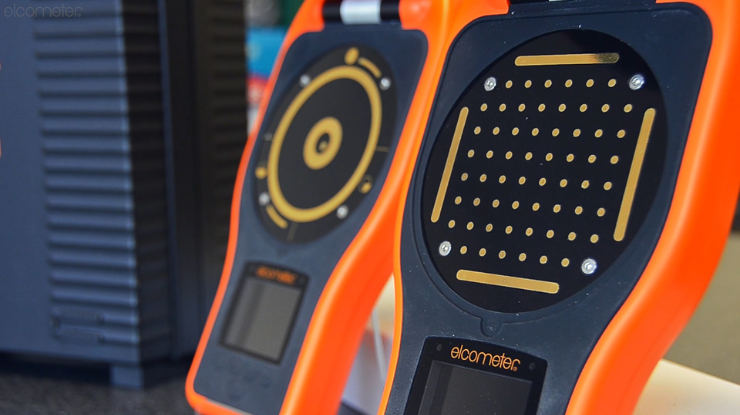 For many years the “holy grail” for surface cleanliness has been the Bresle patch. A foam frame with a latex sheet stretched across it is stuck to the surface being measured.

Using a syringe, 3ml of deionised water is injected into the void and agitated around the surface before being extracted by the syringe.The conductivity of the 'contaminated' water is then measured using a conductivity meter. The level of conductivity is an indicator of the amount of soluble salts that have been washed off the surface.

The Bresle Method is slow, uses needles and is very labour intensive. By contrast, the Elcometer 130 SSP uses a saturated filter paper to extract the soluble salt from the surface.The gauge then measures the conductivity of the saturated, salt impregnated paper to assess the amount of salts on the surface.

In order to be accepted as a valid test method by the industry, the Elcometer 130 SSP must be able to display a “Bresle Equivalent” reading.

To show equivalency of measurement between the Bresle Method and the Elcometer 130 SSP it is essential that all parameters are identical - except the gauges under test - and both gauges must display similar values, taking into account the accuracy and resolution of each test. The issue, however, is how do you provide an exact copy of the salt concentration on the substrate, when both methods essentially wash the surface clean?

Working with the School of Materials at the University of Manchester, UK, an automated, repeatable and reproducible doping method was developed to apply a known salt concentration uniformly over a large panel. Over 200 individual tests were undertaken across a range of concentrations and blast profiles.

The Elcometer 130 SSP can do much more than one Bresle Patch, due to its design, it not only undertakes up to 4 equivalent readings in just 2½ minutes, but can also provide a salt concentration profile - highlighting areas of concern to the user, and much more besides.