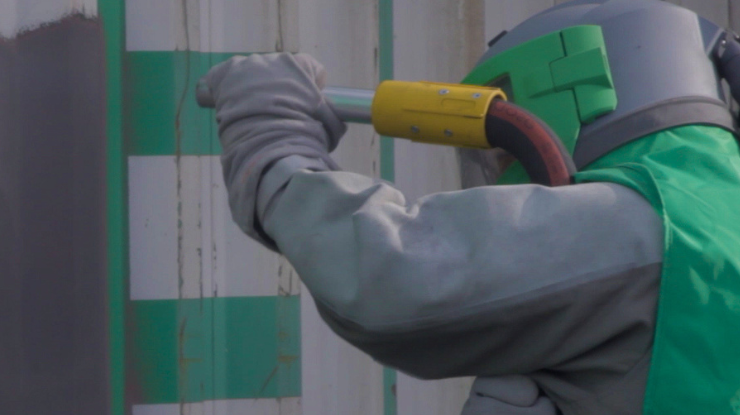 Blasting is seen in many different applications in everyday life - from restoring post boxes and classic cars to preparing ships and bridges for new protective coatings.

Dry abrasive blasting is a process by which aging paint can be removed to condition the under coated material (referred to as the substrate) ready for the application of new paint. This is achieved by propelling an abrasive at high pressure on to the painted surface.

Blasting is seen in many different applications in everyday life - from restoring post boxes, classic cars or deburring components, to preparing the surfaces of ships and bridges before their new protective coatings are applied. The concept isn’t new - the blasting process traces back to a machine patented in 1870 to remove rust and paint. It was decided that hand tools such as grinders and sanders just weren’t quick enough to remove paint from large areas and the blast process was born.

Air is supplied from a suitable compressor and this can be either connected directly to the blast pot or into an Air Distribution Manifold (ADM). The ADM acts as a large buffer of air which can be drawn off as required by an Abrasive Blast Machine (ABM). These are often used if more than one ABM is being used to blast so that air is distributed evenly to both machines. Connected to the ABM are generally three hoses. The green and yellow hoses operate a switch (dead man’s handle) controlled by the blaster to start and stop blasting, whilst the black thicker hose carries the mixture of air and abrasive. The blaster controls the blast process by aiming the nozzle at the areas to be blasted and stripped of coating. It is essential the blaster wears Personal Protective Equipment (PPE) such as a blast helmet, suit, gloves and boots. The helmet is supplied with breathing air via an air filter which ensures that the blaster breathes quality and safe air.

Find out more about our range of Abrasive Blasting Equipment