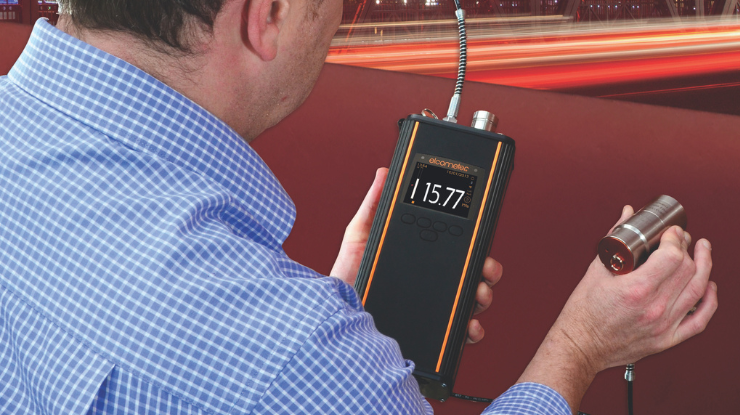 Then people from outside the coating's industry first hear about the pull-off adhesion test method, their initial reaction is one of disbelief. Why would we try to destroy what appears to be a perfectly good coating just to test how good it is?

If a protective coating is applied to a surface then it stands to reason that, in order to protect it, the coating must adhere to that surface. For the coating to do that, surface preparation needs to be carried out correctly. The substrate must be in a sound condition and the profile and cleanliness (normally soluble salt levels) of the surface should conform to that specified by the paint manufacturer. A successful adhesion not only confirms that the bonding of the coating to the substrate meets the specification, but also all the other processes carried out pre-coating have been completed satisfactorily.

Initially, coating adhesion was tested using the cross-cut method. In these tests the coating is subjected to a “St Andrews cross", or 'X' being cut into the coating - all the way down to the substrate - using a craft knife. Over time, the cross-cut method developed into what we now call the cross hatch cut adhesion test, where a latticework of cuts (typically two sets of six parallel cuts) are made perpendicular to each other and the resultant debris is removed.

The resulting appearance is then visually assessed and compared to a chart as prescribed within the relevant national or international standards, such as ISO or ASTM. The overriding problem with both these methods is that they are subjective and the results can depend almost as much on the judgement of the inspector as the adhesion performance of the coating being tested.

There was clearly a requirement for an objective adhesion test, where a value can be ascribed to the adhesion property of the applied coating. This saw the introduction of “Pull Off” adhesion testing. A metal fixture, “dolly”, is bonded to the coating using an adhesive (henceforth known as “glue”). A Pull-Of Tester then applies a lift force to the dolly and the tension is gradually increased.

When the dolly is pulled off the surface, an indicator on the scale shows the numerical value of adhesion expressed in terms of the force per unit area required to remove the dolly.

This development of adhesion testing allowed for a specific value to be given for the adhesive properties of a coating system on a surface and pass/fail criteria were introduced.

To avoid applying a “shock” load, the best way to apply a load for this kind of testing is to continuously increase the load at the same rate. The original “pull off” testers employed a mechanism similar in operation to unscrewing the lid of a jar.The loading was limited by the flexibility of the user’s wrist and the user would need to release their hold on the wheel to re-set their hand on the wheel to continue the loading process. Improved manual loading methods were introduced to enable the continuous smooth loading of the dolly and to facilitate easier loading.

With gauges such as the Elcometer 506 Pull-Off Adhesion Tester, pictured above, the orange handle can be turned continuously thereby increasing the load in a uniform manner, and, due to its design, if the handle is rotated at 1 revolution per second the load is applied at 1 MPa/sec, as required by international standards such as ASTM D 4541.

To take this loading requirement a stage further, fully automated gauges such as the Elcometer 510 were designed to enable a dolly to be loaded automatically and continuously until either the dolly is pulled from the surface or until a pre-defined load has been achieved - at which point the load is rapidly removed, minimising any damage to the coating.