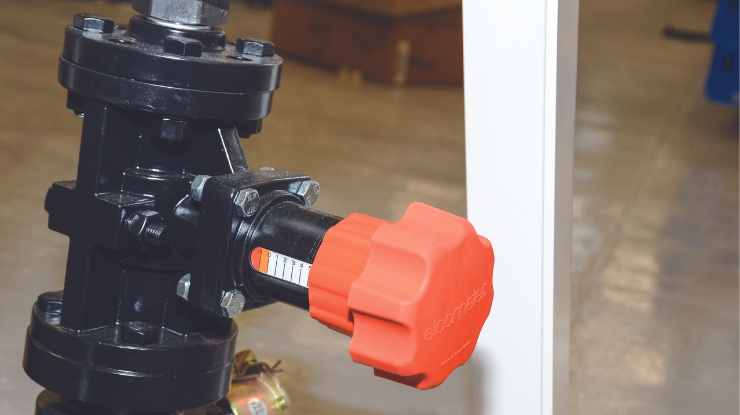 In a similar way that a tap controls the flow of water, a grit valve is used to control the flow of abrasive into the mixer ‘T’ located below the grit valve at the bottom of an abrasive blast pot.

It uses a screw thread to squeeze or release a rubber liner housed within the casting to reduce or increase media flow. However, that’s where the similarities end between traditional valves in the market and the Elcometer GV valves.

It was quickly recognised by the Elcometer design team that a finer thread would enable the blaster to more finely control the abrasive fed into the mixer ‘T’. In contrast to competitors’ coarser, ‘corkscrew style’ threads, the Elcometer system can be finely tuned and balanced such that a minimum amount of abrasive is used in the blast process, saving consumables and reducing cleaning costs.Furthermore, the media flow rate can be adjusted whilst blasting.

In addition to the fine control, the grit valve features a unique flow indicator to ensure that precise and repeatable metering can be achieved as well as indicating the liner wear. Using a trademarked 'ElcoTough' material, the rubber liner is also unique to the Elcometer General Valve. Its long life resistance to aggressive abrasives has proved to last between three and six times longer than other liners on the market. The liner was vigorously tested in-house using Elcometer abrasive test machines before being chosen for integration into the valve.

The Elcometer GV valve has been designed so that when the liner eventually needs replacing it is easy to do without having to fully remove the valve from the blast machine.