Performance Under Pressure - Gets The Job Done Twice As Fast!

Based just a few miles away from Elcometer Headquarters in Manchester, Translink International offers a complete package of repair, refurbishment, remounting, upgrading and remanufacturing of industrial and fire aerials. Kaine McMorrow, Sprayer from Translink posted a time-lapse video on Facebook of a job that he had recently completed. The project used nearly 40 litres (1.4 cu ft) of paint materials and took just under eight hours in total to complete. The only spray guns used on site were gravity-fed, with a maximum pot size of 600ml (20fl oz).

In order to use 40 litres (1.4 cu ft) of paint in a 600ml (20 fl oz) pot, Kaine would have had to refill the pot 67 times before the job was complete – reducing productivity and increasing costs to the company in labour alone.

So, how could Elcometer provide Kaine with a simple yet effective solution to reduce the overall application time?

We got in touch to offer a demonstration of our Sagola spray equipment range to which Kaine happily agreed but expressed his concern about new capital expenditure. Despite this, Kaine and Translink were eager to find ways to reduce downtime whilst preventing wastage of product by minimising overspray. They were also interested in the ability to spray at any angle - something that is limited by gravity-fed spray guns.

Elcometer demonstrated the Sagola 10-litre Inox Pressure Pot together with Elcometer's Sagola X4100 Pressure Fed Spray Gun with our 15 metres combined product/air hose. It was quickly shown that the new set-up could help Translink to achieve their aims. Little overspray was produced - which meant a lot less paint being wasted and filters didn't need to be replaced as frequently as before, and of course, using a pressure pot with a pressure-fed spray gun allowed spray painting at any angle.

Watching the demonstration was Alex Disney, Director at Translink who said:

“We would not be able to stand here watching this with the current spray equipment we use as the entire room would be full of overspray, but there's hardly any with Sagola equipment."

What's more, the pressure pot only had to be refilled four times, instead of the 67 times which had previously been the case - creating significant reductions in downtime, thereby reducing the overall spray time. Switching to Elcometer's Sagola spray solution reduced an eight-hour job to just four and saved considerable paint material costs.

Why not get in touch to see if the Elcometer Spray Division can help save you money, simply email sagola@elcometer.com

Find out more about the Sagola 10 litre Inox Pressure Pot 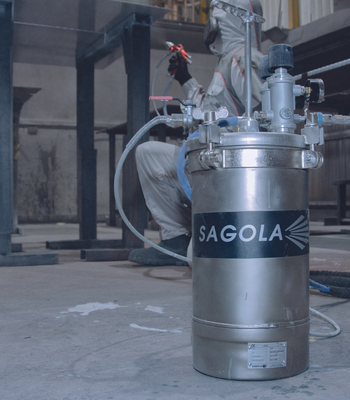