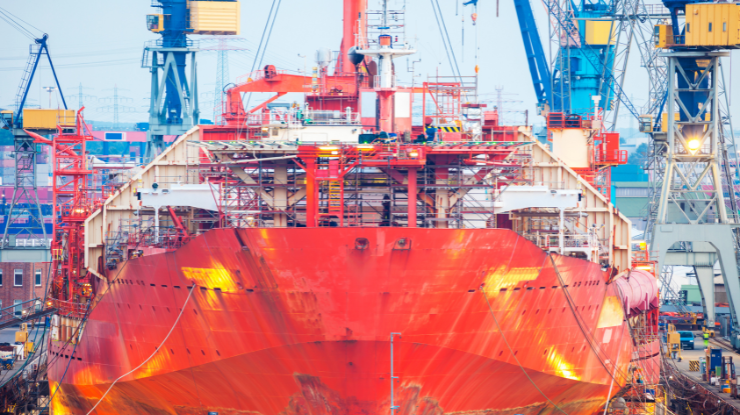 In 2019, Birkenhead-based organisation, HS Barrier Coatings, were tasked with blasting 150 ballast tanks on RRS Sir David Attenborough, a polar research vessel which stretches over 129 meters (423ft) and is valued at approximately £200million.

Due to the harsh environment of the dockyard, where there is a high quantity of salt in the air, HS Barrier required durable blast machines which would not only provide high performance but also remain in great condition, despite a heavy workload. This need was quickly realised by operators who had to undergo frequent maintenance regimes to ensure functional use of competitor blast machines during the early stages of the project.

Having used Elcometer inspection equipment for several years, the Barrier mentioned the issues they were facing with their existing blast equipment when talking to our inspection sales representatives - who suggested the adoption of Elcometer Performance Blast Machines. Following further discussions, HS Barrier Coatings installed an Elcometer 24200 Performance Blast Machine within their set-up and quickly began to see improved results.

During use, the blast pot was attached to a 150m (492ft) long blast hose which stretched across the length of the dry dock before reaching up and inside the ship. The blast pot was also situated 24m (80ft) away from the air compressor running at 400cfm (11327 lpm). Primarily operating at a pressure of 9bar (130psi) and using steel shot media, as well as coarse copper slag and garnet, thanks to its enhanced airflow design, the Elcometer 24200 was able to provide adequate pressure at the quarter-inch working nozzle. After using the Elcometer 24200 blast machine for over three months. the team at HS Barrier Coatings recognised how the high quality, standard and build of the pot enabled improved performance.

Features that impressed the workforce, in particular, included the four-wheel chassis - which made the pot easier to manoeuvre across the site - as well as the moisture separator which prevented water ingress and eliminated the need for an air dryer, something the organisation had previously deployed with other supplier's blast machines. From January to March 2019, the Elcometer 24200 blast machine was in operation for over 1000 hours yet blasters were not required to carry out any maintenance tasks. Over the same time period, the organisation had to service a competitor's blast machine three times!

When evaluating the performance of Elcometer’s pot, Ian Wooding, Painting Supervisor at HS Barrier Coatings said "this is the longest time our blasters have continuously used a pot. After three months, we have experienced no problems, no maintenance, and minimum wear and tear…considering the environment and how much we've used it, it's in great condition."